With sunny skies and temperatures averaging in the 60s and 70s year-round, there really isn’t a bad time to visit San Diego.

There’s been times in December and January I’ve laid out in a bikini and caught some rays, while other times in May and June I’ve worn rain boots and oversized sweaters.

Depending on what you’re looking to do, below are some suggestions on the best times to visit San Diego.

While we do see warm sunny days during these months, rainfall is at its peak. During this time, the beaches are cold and the ocean is freezing.

If you’re not looking for a beachy vacation, this is a great time to visit as hotel rates and tourists tend to be lower during these months.

Why to Visit San Diego During Winter

December Nights in Balboa Park is one of the nation’s premier holiday festivals and free to attend.

The event is always the first Friday and Saturday night in December and brings over 360,000 visitors over the course of two days.

This event is family friendly and features great food, entertainment and attractions throughout the park, including complimentary admission to Balboa Park museums.

San Diego Bay Parade of Lights is one of San Diego’s most well-known holiday events and is coming up on its 46th anniversary.

Each year, the San Diego boating community is given a new theme and dazzles bay front crowds with their creativity showcasing over 80 decorated boats.

Springtime is beautiful in San Diego. Temperatures are a bit cooler during these months and with recent rainfall, flowers are blooming.

San Diego tends to experience “May Gray,” so not all days during this time are sunny and warm.

Tourists still tend to be lighter during this time than the summer months, so you’ll be able to navigate the city more quickly and easily. 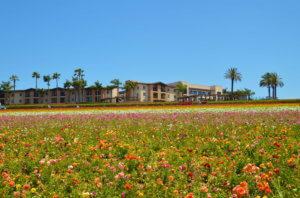 Why to Visit San Diego During Spring

If you’re looking to visit the San Diego Zoo and/or Safari park, this is a great time to visit. You not only avoid a lot of the crowds, but it’s not nearly as hot as you’re walking around the parks.

There are also several food and booze festivals during this time, including San Diego Wine Festival and Taco Fest. If you’re into music events, CRSSD Festival is twice a year in March and October at the Waterfront Park.

The Flower Fields at Carlsbad Ranch open every year from March to early May.

Nearly fifty acres of Giant Tecolote Ranunculus flowers that make up The Flower Fields are in bloom for approximately six to eight weeks each year.

It is a definite must-see if you’re in San Diego during this time.

Summer is the most expensive time to visit San Diego as the days are sunny and warm. This is the best time to visit if you’re looking for a beach vacation.

Ideally, it’s better to come during the months of July-September as San Diego can experience overcast skies during June, also known as “June Gloom.”

If you’re looking for endless entertainment, summer is also the best time to visit San Diego.

Why to Visit San Diego During Summer

Comic-Con is San Diego’s biggest event and takes place in July. Hotel prices skyrocket during this time, so unless you’re going to the event, it’s best to not travel to San Diego during that time.

The San Diego County Fair runs from early June to the Fourth of July every year. It’s perfect for the whole family and features great food, concerts, entertainment, exhibits and (somewhat sketchy), but really fun rides.

Summer is the best time to visit San Diego if you’re looking for festivals and activities all around town.

September is still a great time to visit if you’re looking for a beachy vacation.

Temperatures remain warm and sunny through early October. Mid-October usually starts to cool off and the nights get a bit chilly (chilly – speaking as a SD native).

The crowds lessen as we get into October and November, so hotel rates are less expensive during this time than the summer months.

Why to Visit San Diego During Fall

If you’re a foodie, this is one of the best times to visit as San Diego Restaurant Week is in full force.

Take advantage of all the great deals throughout San Diego County from all of the top restaurants.