8 Adventurous Things to Do in Mexico’s Yucatán Peninsula 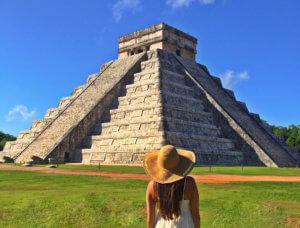 Chichen Itza is one of Mexico’s most popular tourist destinations in the Yucatan Peninsula. It is estimated that well over a million people visit the site every year.

Chichen Itza was one of the largest Mayan cities with very diverse populations and architectural styles.

At the center of the site sits the El Castillo (the castle) pyramid, Chichen Itza’s most popular structure standing at just under 100 feet tall.

There are 91 steps on each side of the four sides of El Castillo. Today, tourists can no longer climb the pyramid.

With its complex structure and intricate design, it is considered to be one of the great wonders of the world. 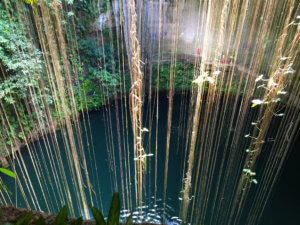 Cenote Ik-Kil is hands down one of the most magical cenotes to visit in all of Mexico. Vibrant plants line the walls and vines fall all the way down from its opening to the water.

From the top, you climb down 85 feet to reach the water. Once down there, the clear blue water plunges another 130 feet deep.

When taking a dip in the water, harmless black catfish swim around with you.

Ik-Kil is said to be sacred by the Mayans. They would perform human sacrifices at the ancient site to their Rain God. 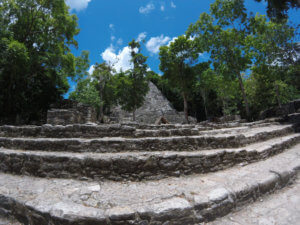 The Coba Pyramid is one of the last of the ancient Mayan ruins that is still open to the public to climb.

Climbing the Coba Pyramid is quite the adventure. There are 120 stone steps to the top and a rope that hangs down for support.

The steps are steep, but the climb is every bit worth the view.

At the top, you see a vast green jungle for miles and miles. It is one of the most spectacular views I’ve ever seen.

Climbing up is the easy part, be careful on the way down as the steps are narrow and a bit slippery.

4. Explore the Tulum Ruins and Beaches 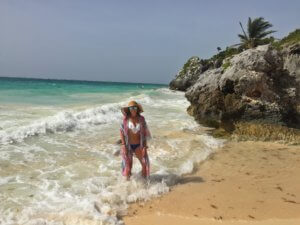 Tulum is one of the most spectacular places on the Caribbean coast. The ruins sit on a cliff overlooking the ocean, making  the area both beautiful and rich in culture.

Tulum was considered to be a significant trade hub with Central Mexico and Central America with its massive walls defending the site against invaders. 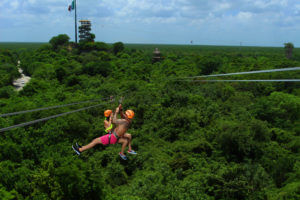 If you’re looking for a place filled with action-packed activities, definitely check out Xplor park.

It’s definitely a workout climbing all the steps to the highest zip line, but zip lining over those jungle views are worth every step to get there.

You can check out Xplor during the day or if you want an even more unique experience, Xplor Fuego offers the same adventures, but at night. 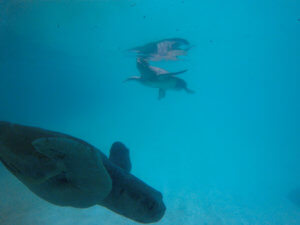 Marine turtles are one of the most admired animals in the Mexican Caribbean. Akumal is a great place to snorkel in Riviera Maya, especially when looking for sea turtles.

In Akumal, there are options to snorkel by yourself or with a guide. While snorkeling, you’re likely to find sea turtles, tropical fish stingrays and octopuses.

There’s a chance you might even find the Wall of Fish. The Wall of Fish is thousands of silver fish swimming in a circle. It’s quite an incredible sight.

Tamacha-ha is an epic underground cenote that is located by the Coba mayan ruins.

At the opening of the cenote there is a spiral staircase that takes you underground. If you want a thrill, there are two platforms you can jump off of right into the crystal blue water below. One platform is five meters and the highest one is 10 meters.

Once you’re at the base of the stairs, you can relax on the platform or take a dive into the cool water. The water is so clear, when you look around underwater you can see the rocks at the bottom or people swimming from afar. 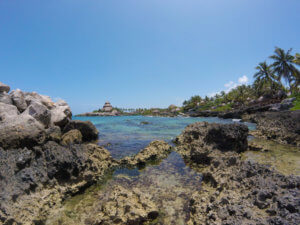 A popular eco-park and a place you could easily spend a day (or two) exploring is Xcaret Park. It’s a perfect place for people of all ages with a multitude of attractions and optional activities.

For the nature lovers, there’s everything from a butterfly pavillion to a jaguar attraction.

For thrill-seekers, you can swim with sharks and stingrays, or even hop on the Adrenalina, a high-speed boat ride on the Mexican Caribbean waters.

Some of the rivers are narrow with beautiful mangroves, others have waterfalls and a few parts are completely pitch black.

After grabbing a life jacket, you can jump in one of the rivers and get out at different points along the way. I easily spent half my time at Xcaret going through the different rivers and I loved every second of it.